From $ 15 billion in 2013 to 335 in 2025, according to PWC forecasters . The forecast for the sharing economy globally seemed to hit. In Sweden the same trend. The government caught fire and came up with an investigation, SOU 2017: 26 Share Economy .

Better for the environment and local cohesion and more efficient business, Per Bolund noted. Although he would not have been Minister of Finance if he had not worried about the tax loss, regardless of hobby or tax fraud.

In my childhood, the sharing economy was so obvious that the word did not exist. Masons, painters and carpenters were always at hand – with or without receipt. It happened that the jobs were switched to milk, firewood and potatoes. Or you borrowed the horse to harrow at the site.

What sharing economy was asked in Ucklum? Uber and the Sunfleet car pool do not venture outside the cities. Possibly a single rental through Airnb, but most people go to send every fifth earned krone there. Equally bad with the startup’s sharing services with everything from tools to electric scooters. In Gothenburg maybe, but not in Ucklum.

In 2017 , 42% of online purchases went through Amazon. Facebook had over one month more visitors than the entire Internet in 2010. Airbnb listed 5 million homes for 150 million customers. This way we can better manage the reasoned people themselves, in the same way as for the peasant cooperation a hundred years earlier. And Consumption but one did not exist in Ucklum.

In Ucklum, we have shared stuff and services for a couple of hundred years, at least. They were so born the Ucklumpoolen, as an online marketplace for everything that could be changed, with or without money. 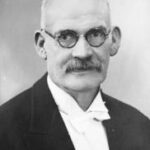 You hear when Karl Johansson from Tåsteröd is on his way to church, but not when he goes home. There was a saying in Ucklum about the watchmaker Johansson. He left repaired bells on the church hill and brought with them broken homes.

In the 19th century, the Ucklum priest from the pulpit read announcements, including advertising of the village’s goods and services. It could be about threshing plants, horse castration or as here potatoes and rye from Marit Larsdotter in Tåsteröd. The deal was made with a handshake on the church slope. Swedish eco-farm doubled sales in the food trade in 2013-2016 but then leveled out. (Countless vegetables in the absence of statistics). The meat and milk also reduce ecosystems quenched methane. There were signals that eco-crops were not more useful and were not so good for the environment.

Cultivating without chemical control and only with manure costs more. Even worse with the traders’ well-increased margins. Not always a dance on roses, Gert Winkler noted with great cultivation on the Saw in Ucklum.

Winkler’s company Åke Wikström was quick to round up the grocery stores. First a farm shop Solgläntan, next door to the cultivation on Sågen. Since the initiative to the Farmer’s Market in Gothenburg.

The lift came with Reko-ringingen 2018. From the signage on facebook the order was written in the comments field. Early mornings we saw from the tower how Gert and his people hurried with the harvest, because pinch fresh was important.

The bags were picked up a given half hour from Åke’s tailgate in the school parking lot in Stenungsund or Ljungskile and other meeting places. Like a church hill.

Inspired by Finland, there was a wave of recoil across the country. It started in Grästorp in 2016 and three years later there were 120 rings with a quarter of a million members.

The slowdown that appeared in 2019 in Finland spread here the following year. The suppliers’ tame marketing reached only the eco-savvy. Why pay more otherwise?

It caused the church hill to move online, with customer profiles and segmentation. More enterprising producers convinced with the taste experience, often newly harvested and with campaigns for primers. The village’s own food agency, TV-famous Birgitta Rasmusson from Ljungskile, cooked closely in the Youtube channel.

Some sold with their own comfort and opened farm restaurants. Foreign tourists eased on the purse to be invited home for a Bohuslän dinner, not via Airnbs Dinner parties but attracted from the site Home2bohusfarm. Thank the rural food mom , including Ucklum’s own pub queen Lilian Mannerström , for the success. In 2026, the experience is the primary, not the cultivation.

In my childhood, there were five country merchants and just as many macks along the national rivers through Ucklum. Most with a cafe and even food service. In a way, a continuation of early centuries’ maple nooks, to the dismay of the innkeeper in Smedseröd. Preferably at a stream where both the horse and the driver could quench the thirst. Maybe Åsa Kalles in Sköllunga and Lund’s Johanna at the Grössby mill will re-emerge as the hook name for new age farms?

The church hill was forgotten because fewer believers attended the mass. Equally bad with the tailgate meetings. Fit for a time every two weeks did not work for everyone. Not as many go to Stenungsund because Coop drives home groceries. Even the pharmacy and the System are experimenting with home runs. Fixed e-commerce packages were mostly obtained in the community.

The shopping center Stenungsund Square (created on the initiative of watchmaker Johansson’s son Stenhede) is thinning. It is unclear if this is due to too few customers. Or because the ground drops and the sea rises. Soon is Stenungsund Bohuslän Venedig?

Why a number of messenger cars spinning in the countryside when one is enough? It redeemed the business idea for a couple of eco-producers in the parish. One click on the app and the same car comes with e-commerce packages, medicines, ICA bags – and eco-producers’ own products. Even smoking gray pea soup cooked by the cook in Grössby.

Tractors run unmanned on the grounds programmed as robotic lawnmowers. Driverless cars with fire power are increasing and they are joined by small goods trucks on the roads.

Micke got rid of the job as a car mechanic. He has been building epatractors since he was thirteen. With these skills he designs a robot car with the help of friends from Hogia. A truck factory at Adrian is in progress.

In this year of grace 2026, Mike’s robot father is seen testing supplies on the Ucklumvägarna. Here it stops and a ”miniature crane in the miniature” lifts off the packages in the cupboard outside the villa.

Car pool has been in the parish for quite a while. Nowadays, some cars drive to the villa driverless. However, changing tools instead of buying had a slow start. Until robot trucks like Mickes came and changed tools as automatically as the industrial robots on Volvo.

Not even a push of a button on the phone is needed for a long time. They say ”need a woodcut this Wednesday” in the mouth. And the truck grabs one in the garden cupboard of a neighbor and then leaves the hood on the client’s log. A woodcut that cuts unmanned, of course.

Payment is made with the local currency Ucklimer, which can be used for services and purchases from others in the countryside. Tax-free between friends applies according to the Swedish Tax Agency – and with the pool everyone in the parish has become friends. With the village’s old confidence that makes the business work.

It was not the exchange of drills and other simple gadgets that gave the lift. Without expensive machines, like the common lawnmower robot. Or the device that goes out with the dog. The portable gym container is popular, especially among the elderly who also need to be rested.

The most important thing in the Ucklumpool is the robot that can cultivate the soil and clean the weeds of the garden. Even come to the kitchen with a catch of busy carrots.